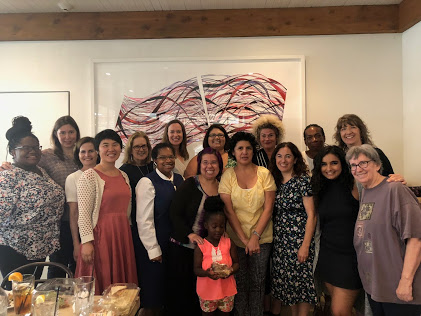 USC WIM Board members attended the annual transition lunch held in July to honor outgoing members, to welcome incoming members, and to kick off a new season of empowering the women of USC! This year we ventured to the Artist’s District’s Zinc Café. Board Members Leonette Williams and Bernice Taylor were honored for their service as they step off the board. Leonette Williams has been a part of USC Women in Management since its inception forty years ago. She served various roles over the years and returned to serve the past four years as WIM’s Vice President, ensuring that the HERS Institute scholarship continues well into the future. We welcomed new board members: Dana Coyle, Karen Escobar, Victoria Esquer and Janet Schmidt.

As a group we talked of being grounded and powerful as individuals and coming together as a community of like-minded individuals to continue to provide our members the strength of this organization. We discussed the desire to include more members in the creation of events via subcommittees to brainstorm the upcoming year’s programming. We noted that our mission “to empower the women of USC” remains as it did since the inception of Women in Management in 1979; however, what is our vision? Members agreed it had to do with creating a cohesive leadership program, connecting with senior leadership, developing deeper relations with other organizations doing similar work within our university and throughout higher education. We agreed that getting feedback of members-at-large as how to even better serve us all was critical.

We reiterated the fact that our organization was formed by twenty like-minded women at the University of Southern California (USC) in 1979 who followed the need: to empower the women who work at USC and to have women represented in the leadership positions at the university. From our own About Us page: “The compelling forces driving the formation of Women in Management included the need for increased representation of women in responsible University positions, equal pay for men and women holding similar positions, and the provision of a forum in which women could develop leadership skills.”

The organization was not offered by the institution; it was a community created by like-minded, forward-thinking individuals who felt compelled to come together to make the changes they sought and were needed.

Let us continue to follow the need and to offer a platform that will propel women to the highest levels of responsibility at USC. Let us build a network of like-minded women who will support and empower each other at every level of the institution. Let us all take ownership of the positions we hold and lead at every level.

The board looks forward to serving us all as we head into the 40th celebration of this organization that has served the women of USC since 1979!

You don’t have to be a member to keep up to date (though we hope you join!).